Recognize that the Asian Elephant, a seriously endangered species and one of Asia’s most charismatic animals, faces a challenging future with the loss of its habitat, fragmented populations, high levels of human-elephant conflict, poaching, as well as other factors that have resulted in serious population declines in most of the Range States; 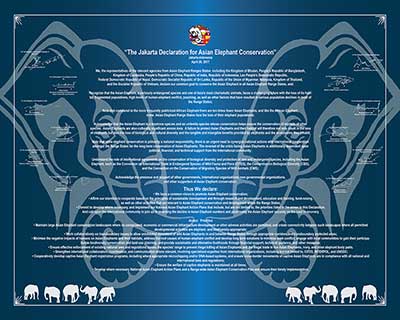 Acknowledge that the Asian Elephant is a keystone species and an umbrella species whose conservation helps ensure the conservation of myriads of other species. Asian Elephants are also culturally significant across Asia. A failure to protect Asian Elephants and their habitat will therefore not only result in the loss of elephants but also the loss of biological and cultural diversity and the tangible and intangible benefits provided by elephants and the ecosystems they inhabit;

Note that while elephant conservation is primarily a national responsibility, there is an urgent need to synergize national actions with international cooperation amongst the Range States for the long-term conservation of Asian Elephants. The reversal of the crisis facing Asian Elephants is additionally dependent upon political, financial, and technical support from the international community;

And call upon the international community to join us in reversing the decline in Asian Elephant numbers and positioning the Asian Elephant securely on the road to recovery.

DONE in Jakarta, Indonesia on the Twenty Day of April in the Year Two Thousand and Seventeen, in a single original copy in the English language.