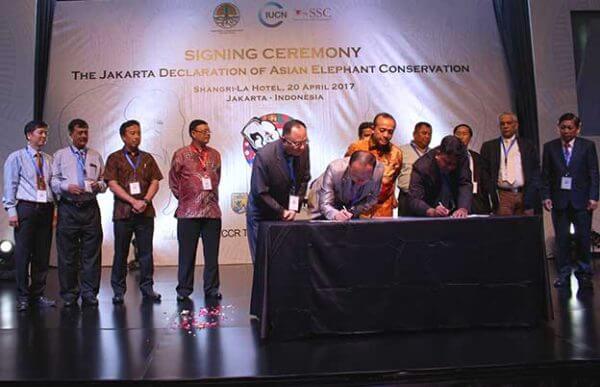 The Asian Elephant Range States Meeting (AsERSM) was held at the Shangri La Hotel in Jakarta, Indonesia, April 18-20, 2017. Delegates from all 13 Asian Elephant Range States were invited and each sent two high-level representatives. The main objective of the AsERSM was to identify the priorities and challenges at a country and range-wide level, and to determine how they might best be addressed. It was also an opportunity to produce a document memorializing the meeting and demonstrating the range State governments’ commitment to securing the future of elephants throughout Asia by means of “The Jakarta Declaration for Asian Elephant Conservation”.

Every few years a select group of Asian elephant specialists, researchers, and conservationists convene to discuss priorities and goals to protect this endangered species. Known as the Asian Elephant Specialist Group (AsESG), they are an advisory group of volunteer members that functions under the Species Survival Commission (SSC) of the World Conservation Union (IUCN). The IUCN/SSC AsESG met for the 9th time in Bangkok, Thailand, from April 25-27, 2018. The meeting brought together members who are Asian elephant specialists from various fields: biology, conservation, ecology, management, veterinary medicine, etc. The meeting was also attended by government representatives from Asian elephant range countries, and by observers representing various NGOs. The International Elephant Foundation was honored to be in attendance, as represented by Advisor Heidi Riddle.

The meeting was opened by the current Chair of the AsESG, Mr. Vivek Menon, CEO of Wildlife Trust of India. The Guest of Honor, the Honorable Minister of Natural Resources and Environment of the Kingdom of Thailand, General Surasak Karnjanarat, gave a talk about the value elephants have in Thailand’s history and culture, and the country’s dedication to elephant conservation.

Presentations started with an update by Wahdi Azmi (Regain Foundation, Sumatra) and Heidi Riddle (IEF) on the Asian Elephant Range States Meeting held in 2017 in Jakarta, Indonesia. IEF had been instrumental in coordinating this important event where all 13 Asian elephant range countries agreed to a list of goals and priorities set out in “The Jakarta Declaration for Asian Elephant Conservation”. Following this update, country reports on the status of Asian elephants were given by range country representatives. It was clear that the historic 2017 Jakarta meeting is still having a positive impact on Asian elephant conservation policy.

The third day wrapped up the working group reports with discussions on suggested issues for future working groups to address. Presentations on the Use of DNA for Databases, the Management of EEHV in Elephants in Asia, Wildlife Friendly Roads and other Linear Infrastructures, and on Illegal Trade followed. In 2016, IEF provided support for a CITES requested review of the illegal trade in live Asian elephants; a summary and update of that review was presented by Heidi Riddle during the Bangkok meeting. Other presentations discussed the illegal trade in elephant parts, in particular a new threat of Asian elephants increasingly poached for their skin.

Together, these experts and government officials bridged the gap between conservation and policy and shared lessons learned to increase capacity. During the presentations IEF’s contributions to and support of Asian elephant conservation were acknowledged. The meeting concluded with an offer from 4 countries to host the next AsESG meeting, likely be held no earlier than the end of 2019. Working collaboratively on behalf of Asian elephants is essential to their survival; IEF looks forward to the next AsESG meeting and staying involved in the important issues of conservation and preservation of this iconic species.